Home Safety Checklist: 10 Things to Inspect Right After You Unpack

Bob Myers
Moving into a new home?  Soon after unpacking all those boxes, you  should run through a home safety checklist, just to make sure you and  any family members will be as secure as can be in your new digs. We  don't want to make you paranoid, but as much as you'd like to think otherwise, hidden dangers could be lurking around every corner—from your dryer vent to your water heater.  So give everythingthe once-over.  And use this list to hit all the areas that could spell trouble down the road. 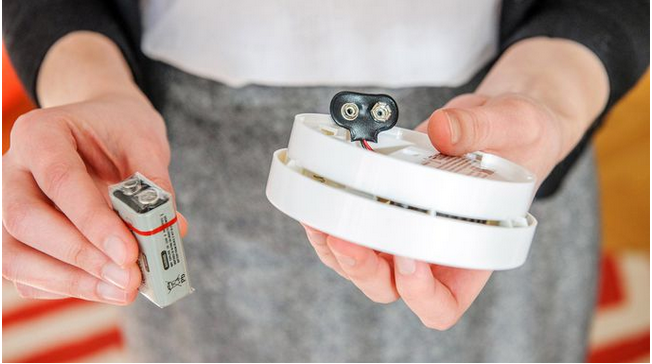 This one is obvious, but the importance of checking your smoke detectors can’t be stressed enough. Make sure they’re properly installed, working, and clean. Consider  the following statistic from the National Fire Protection Association  if you need any motivation: 3 in 5 home fire deaths occurred in homes  with no smoke alarms or nonworking smoke alarms. In fires in which the  smoke alarms were present but did not operate, almost half of the smoke  alarms had missing or disconnected batteries. The NFPA recommends  installing smoke alarms inside every sleeping room, plus in the hallway  on every level of the home.

There are a million new things to buy  when you move into a new home, but don’t scrimp when it comes to buying  fire extinguishers—get one for every level of your home. “It’s a  simple thing you can do, but you’ll be amazed how many people live in  multilevel homes that don’t have this in place,” says Tariq Abdullah, CEO of Tarchitects and Elite Real Estate Inspectors. “It can truly spell the difference between a tragedy and a simple fix.”

If your home has a furnace that uses gas or oil, you should also have a carbon monoxide detector.  More than 150 deaths due to accidental carbon monoxide poisoning are  reported each year, and many of those deaths could be prevented by CO  detectors. “Unlike smoke, carbon monoxide has no color, no taste, no smell and is poisonous,” says Kurt Wedig,  president and CEO of OneEvent Technologies. “Prolonged exposure or  large amounts of CO can overtake a person in minutes without  warning—causing them to lose consciousness and suffocate due to lack of  oxygen. “ While many smoke detectors are also carbon monoxide  detectors, there’s no guarantee the smoke detector in your home is a  dual detector or that it’s working correctly. The U.S. Consumer Product  Safety Commission recommends placing both smoke and CO detectors on  every level of the home.

Check your dryer vent. We're not talking about the one that's inside your dryer; we  mean the big vent from your laundry room to the outside. Sure, it’s a  hassle pulling the dryer away from the wall, but it should be done at  least three or four times a year, as lint is highly flammable. In fact,  an estimated 2,900 home clothes dryer fires are reported each year, and  the leading cause is lint-filled dryer vents.  Here's how to clean a dryer vent.

In case you do hear those smoke detectors go off, make sure you have an escape route for all members of the family. “If possible, figure out two ways to exit every room, even if that means out a window,” says Robert  Siciliano, CEO of IDTheftSecurity.com. “Make sure everyone in the household understands and can run through the escape route.”

A long, hot shower after all of that moving probably sounds great, but  check your water heater first to make sure things don’t get too hot.  While the Consumer Product Safety Commission recommends setting a home’s  water heater at 120 degrees Fahrenheit, some people hike theirs to  temperatures so high they can be scalding, especially for children or  the elderly.

Few people think to check  the quality of their exterior doors, but sometimes cheap contractors or  house flippers will install an interior door as an exterior door, which  can cause a number of issues. Interior doors are not built for  insulation, so your energy bills could be higher. What's more, these  doors are also far less safe because they often have hollow cores and  are not built to resist forced entry, says Jonathan Johnson, a home safety expert with YourLocalSecurity.com. If that fits your situation, consider getting a new one.

You  should also change the locks on your new home or have them re-keyed.  While getting the keys at closing was probably exciting, it’s less than  exciting to think of the potential number of people who might have been  given copies by the previous owners.  From baby sitters to neighbors to relatives, an unknown number of people might have a key (and instant  access) to your home.

Generally, window screens are designed to be removed from the interior of the home.  However, if they're installed backward—a surprisingly common  mistake—they can make an easy entry point for thieves. No screen will stop a determined thief, which leads to our next point: window  latches.  Even if windows seem latched, it's always a good idea to test  them as if you're trying to break into your own home. Older latches,  especially plastic pieces, can break after extended use, yet show no obvious signs of breakage.

Here’s one you probably won’t think about until bad weather hits: the weather  alert apps you installed when you previously lived in another city,  state, or country. Make sure to update them with your newest location  before natural disaster strikes. The American Red Cross has a step-by-step guide to setting up emergency alerts.

Please consider The Myers Team your resource for all things real estate.   We have over 30 years of real estate experience, specializing in the Montgomery County area.  If you are refinancing, want a recommendation, need a service provider or just have a home related question, please give me a call at  301-910-9910 or email me at bobmyersteam@gmail.com.
share Share
arrow_backGetting Over THE ONE That Got Away
Return to Blog Index
VA Home Loans Soaringarrow_forward